An altercation between the Fun Train and a Punch & Judy booth 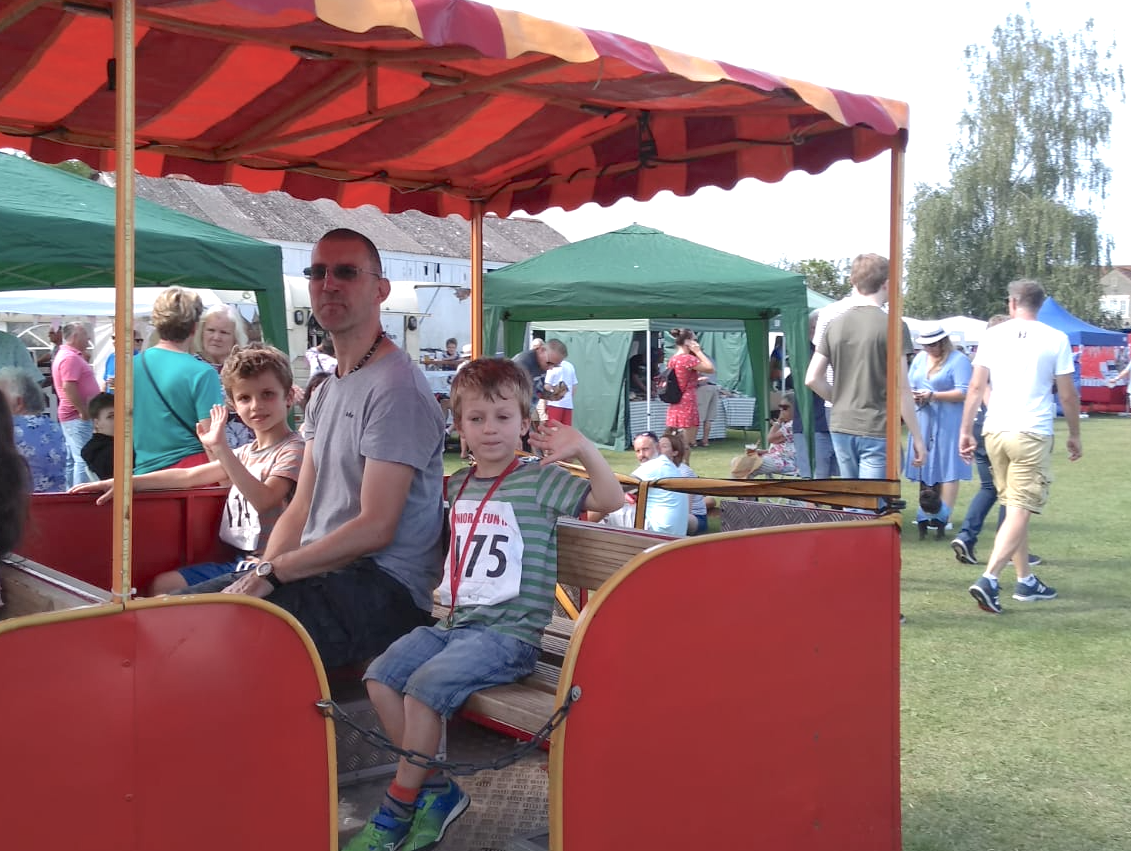 One of the highlights of the Baltonsborough Show today was an altercation between the Fun* Train driver and the Punch & Judy booth. (*The word ‘fun’ is being stretched beyond any reasonable usage here.)

The Fun Train was driving around the village fete in a field tooting its airhorn. The airhorn was very loud. A large crowd was sitting around being entertained by the traditional Victorian puppet show of hitting babies and policemen and had not left enough room for the fun train to get through.

So the train sat there, driver fuming more than the funnel was, blasting his airhorn and completely drowning out Mr. Punch explaining to Judy that babysitting involved sitting on the baby’s head.

The driver decided that the crowd weren’t clearing quick enough and so disembarked to shout at the crowds.

On the next lap, the same thing happened again, this time with Mr. Punch throwing in sarcy comments about the ‘funny train kerfuffle’ at the back of the crowd.

So when Milo requested a ride on the train, I was very happy to jump onboard what felt like it was going to be a Louis Theroux type experience.

A large crowd of people were standing in the way of the train’s stopping point. There were no signs or cones to denote where the train pick up/drop off point was, but the way the train was driving at full speed at the crowd of people while shouting at them to clear out the way, it seemed that this was the place to be to catch the ‘fun’ train.

I even witnessed a stand-off between the train and two old women in wheelchairs, the train blasting its airhorn as if attempting to shift a herd of stray cattle.

As soon as he hopped out of the cab, the driver was grumbling that he’d travelled a long way to get there and that he was losing money by having to keep stopping and that it was a stupid place to put a Punch and Judy booth anyway. On this last point, I would find it difficult to argue, as there aren’t really many places that are good locations for a Punch & Judy show other than the bottom of a disused mine shaft.

He splayed out two pleading hands and said, “Surely people can see a bleeding great train coming towards them.”

I said, “I would be really surprised if they couldn’t hear it.”

He then joked that he’d like to put a Bren gun on the front of his train. I particularly liked the detail that he’d selected a specific gun of choice in his dark fantasy of gunning down a group of children watching a puppet show.

The other parent in the carriage ahead grinned politely and nodded, trying to placate the driver without flicking any more fuel on the raging fire.

I suggested he should just fit a cow-catcher to the front and nudge through the crowd.

“They’re not people,” he shrieked. “They’re sheeple. One sits down in the wrong place and they all sit down.”

His readiness to leap into tinfoil hat conspiracy slang suggested there was a plethora of theories and stories he could relay about people and the world and how it all really works behind the scenes.

But there was a train to catch, so I settled for suggesting he should plough straight through the Punch and Judy booth and shout, “that’s the way to do it.”

He nodded and grumbled something while climbing into his cab, blasting his airhorn and shouting from his window at anyone who dared let even their shadow fall across the imaginary train tracks that he was so certain existed outside his own head.

When we arrived back at the ‘station,’ the train came to a safe stop. Hayley stepped forward to take a picture of a beaming Milo sitting in the carriage. The driver leapt from his cab, waving his arms, as if starving refugees were mobbing an aid convoy, and shouted, “Stand back, everybody get back. Let passengers off the train first. I don’t want no bumping of heads.”

And yet, clearly in his supernova face, bumping some heads seemed to be exactly what he did want, but you can’t get away with that nowadays unless you have some glove puppets, a big stick and a string of sausages.