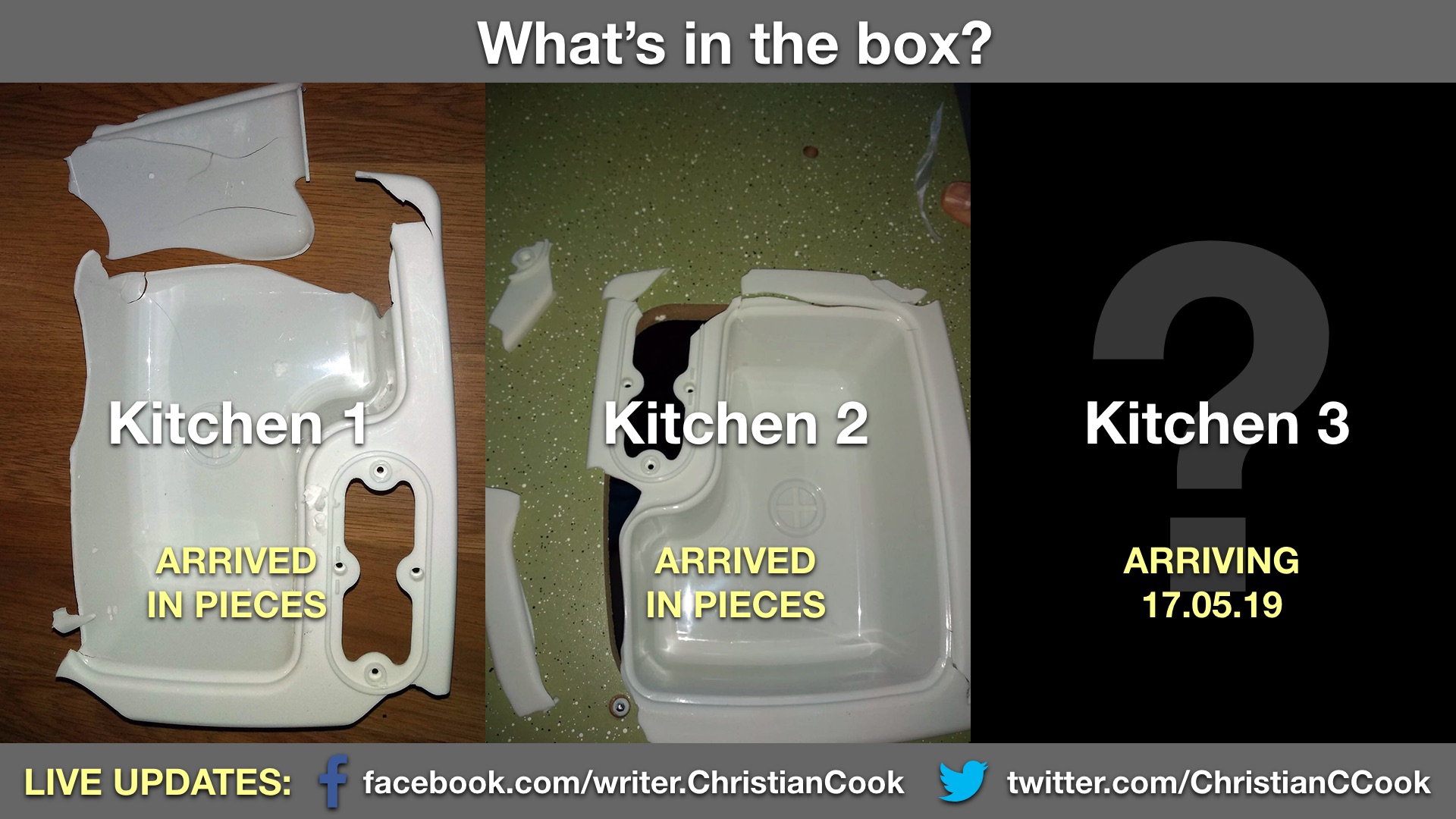 In this day and age where our beloved national treasure, David Sir-Attenborough-face, can be seen regularly on our screens, Heimlich manoeuvring Barbie dolls from the delicate stomachs of baby seals, it is with a reluctant and heavy heart that I feel the need to suggest to a company that they should include more packaging in their products.

Not only does it have all the cooking and storage appliances of most play kitchens, but this one features a cute little washing machine with a laundry basket. This was ideal, as she is very fond of collecting socks, though mainly to eat, so she’ll probably put them straight into the pretend oven on gas mark durr. Don’t ask me what number durr is. Most of what she says is nonsense.

We ordered the kitchen in plenty of time and the box arrived within a week.

When we opened the box, we discovered that the plastic sink and the washing machine drum were both broken into multiple pieces. There were more cracks on display than at an international plumbing convention.

Let me get straight to the issue here. Very flimsy plastic pieces are nestled in amongst large heavy wooden slabs with inadequate protection. The flimsy bits of polystyrene around the delicate areas will undoubtedly feature soon in Hello! magazine with red circles highlighting that ‘Little Tikes kitchen goes out in these daring little polystyrene numbers Look!.’

All it takes is an ‘enthusiastic’ delivery driver experimenting with gravity-assisted unloading and those wooden pieces are pile driving the plastic like a couple of tag team pandas at the WWF.

We contacted the reseller and the item they had sent through was their last in stock, so they duly refunded us, but didn’t bother to have it collected. I’m not surprised because they’re as heavy as Stonehenge offcuts. From the weight, you’d think you’re using granite worktops on these things.

So we ordered a replacement straight from the Little Tikes account on Amazon.

It arrived today. Inside, the sink was again smashed into pieces.

Both these kitchens look more like crack den kitchens after a heavy-handed police raid, but as our daughter hasn’t even notched up one orbit of the sun yet, those aren’t the sort of games she’s into.

One of the most disappointing aspects of all this is that you’re a good company. If you turned up at a nursery and they didn’t have a Little Tikes car then you’d be on the phone to the council to report something dodgy was going on. The Little Tikes cars are to our nation’s nurseries what Ford Transits are to M25 tailbacks.

You’re a better company than this. This isn’t who you are, but the same product arriving from two different suppliers with the same components smashed to pieces shows something is going wrong here. Is it the product? Is it the packaging? Is it the delivery? A bit of all three maybe? But you need to step up and sort this.

Amazon initially asked us to send it back ourselves, but as experts still haven’t figured out the pyramids, it’s a big ask to expect me to work out how to shift an infinite weighted object through the infinite queue at our local post office.

Amazon accepted this point and, bless their Serena-chewed socks, agreed to deliver another kitchen upfront on Serena’s birthday and also collect the other one once the shire horses have recovered a bit.

And so we’ll soon have a third kitchen to add to the ever-expanding Little Tikes Kitchen Showroom that our hallway has now become.

The nation waits with bated breath.

While in transit, the kitchen will become Schrödinger’s kitchen, both complete and broken at the same time. Only when we open it and collapse the waveform will it take on its final state.

On Friday, I’ll be live streaming/videoing (WiFi permitting) the opening of the third box.

I’ll be Morgan Freeman while the Brad Pitt of the nation screams, “What’s in the box?”

The question you have to ask yourself Little Tikes is… do you feel lucky?